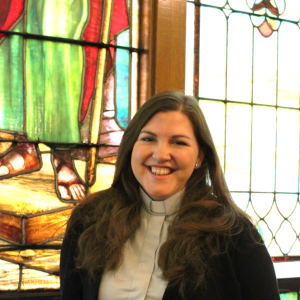 Reverend Rebecca Ajer Frantz grew up in Southern California and felt the call to ministry while attending Wittenberg University in Springfield, OH. After graduating with a Bachelor of Arts in music and religion, she began seminary at the Lutheran School of Theology at Chicago. She completed a unit of Clinical Pastoral Education in Omaha, NE and spent a year interning at St. Paul’s Lutheran Church in Vancouver, WA before graduating with her Master of Divinity in 2013.

Pastor Becca has supervised seminary students from United Lutheran Seminary and has always gotten involved with local Lutheran Outdoor Ministry sites. She loves worship and faith formation, and has written for the ELCA resources “Bread for the Day” and “Sundays and Seasons”. In recent months, she began serving as a board member for Young Clergy Women International.

She is married to Andrew, a park guide at Petersburg National Battlefield, and they have a two-year-old named Owen, who loves music, trucks, and animals.

Pastor Becca may be contacted at pastorbecca@lcosva.org. 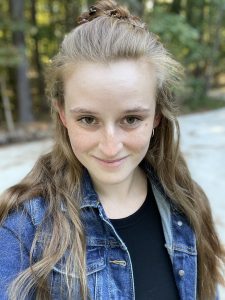 Kayleigh Dumont, born and raised in the Midlothian area, is a long-established member of Lutheran Church of Our Saviour and began her position in early 2018.

Her attachment to writing and editing has extended beyond her studies. In 2016 she served as a copyediting intern at Blackbird: an online journal of literature and the arts, and as an editorial intern at Virginia Living Magazine during the summer after graduation, where she oversaw the 2017 Made in Virginia Awards. Kayleigh also worked at both VCU Writing Center campus locations as a writing consultant, from her last semester into the end of 2017; during this time, she won the 2017 Undergraduate J. E. Whitesell Award for her critical essay on Virginia Woolf’s 1922 novel, Jacob’s Room. She is currently pursuing a master’s degree in English at VCU, where she has been volunteering with Blackbird and British Virginia, as well as won the 2021Graduate J. E. Whitesell Award.

Kayleigh may be contacted at admin@lcosva.org. 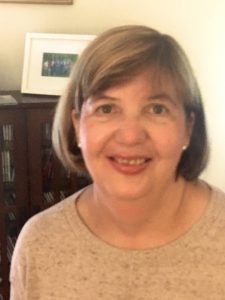 Susan Kish became our music director in January 2018. She is perhaps best known in our community for her prior role as choral director at Manchester High School, where she taught for 33 years and grew the choral program from 60 students in her first year to its all-time high of over 400 students in 11 choirs. Growing up in a large Disciples of Christ congregation, she was playing the organ by the age of 15 and studied sacred music and hymnody as part of her major in organ and music education at Lynchburg College. A Lutheran for over 30 years, she loves sharing the great hymns and choral music of the church at LCOS while directing the voice and bell choirs and working with the Sunday School and preschool kids. Susan is married to Rick and has three daughters and sons-in-law, four stepsons, and six grandchildren five and under.

Susan may be contacted at musicdirector@lcosva.org.

Kenneth Taggart grew up in Chesterfield, just a few miles from LCOS. He studied piano as a child and began playing the organ for his church in middle school.

Kenneth attended Eastern Mennonite University and VCU, where he studied organ and majored in music, with a minor in religious studies.

After college, Kenneth served as the music director for Main Street United Methodist Church in Bedford, Virginia for eight years. While there, he joined the volunteer fire department. He now works for Spotsylvania Fire, Rescue, and Emergency Management as a firefighter/medic.

Kenneth may be contacted at accompanist@lcosva.org.

Mary Dumont has served as the director of The Giving Tree Preschool since 2000.

Mary was born and raised in Niagara Falls, NY, and graduated from the State University of New York at Buffalo in 1981 with a BA in mechanical engineering. She then worked for Penelec (Pennsylvania Electric, Co.) in Warren, PA for eight years before moving to Chesterfield in 1989 with her husband, Brian.

Mary may be contacted at preschool@lcosva.org.

Inga Noble formerly worked as a lead teacher for three- and four-year-olds at Skipwith Academy. Her favorite Bible story is Noah’s Ark. What she loves most about working with children is observing how they grow emotionally, spiritually, physically, educationally, as well as how they mature throughout the year.